skip to main | skip to sidebar

My Blog Has Moved

I have moved my blog to my website. You can check it out here at www.vandervinnestudio.com.
Posted by Mark Vander Vinne at 5:18 PM No comments:

In the Midst of Spring 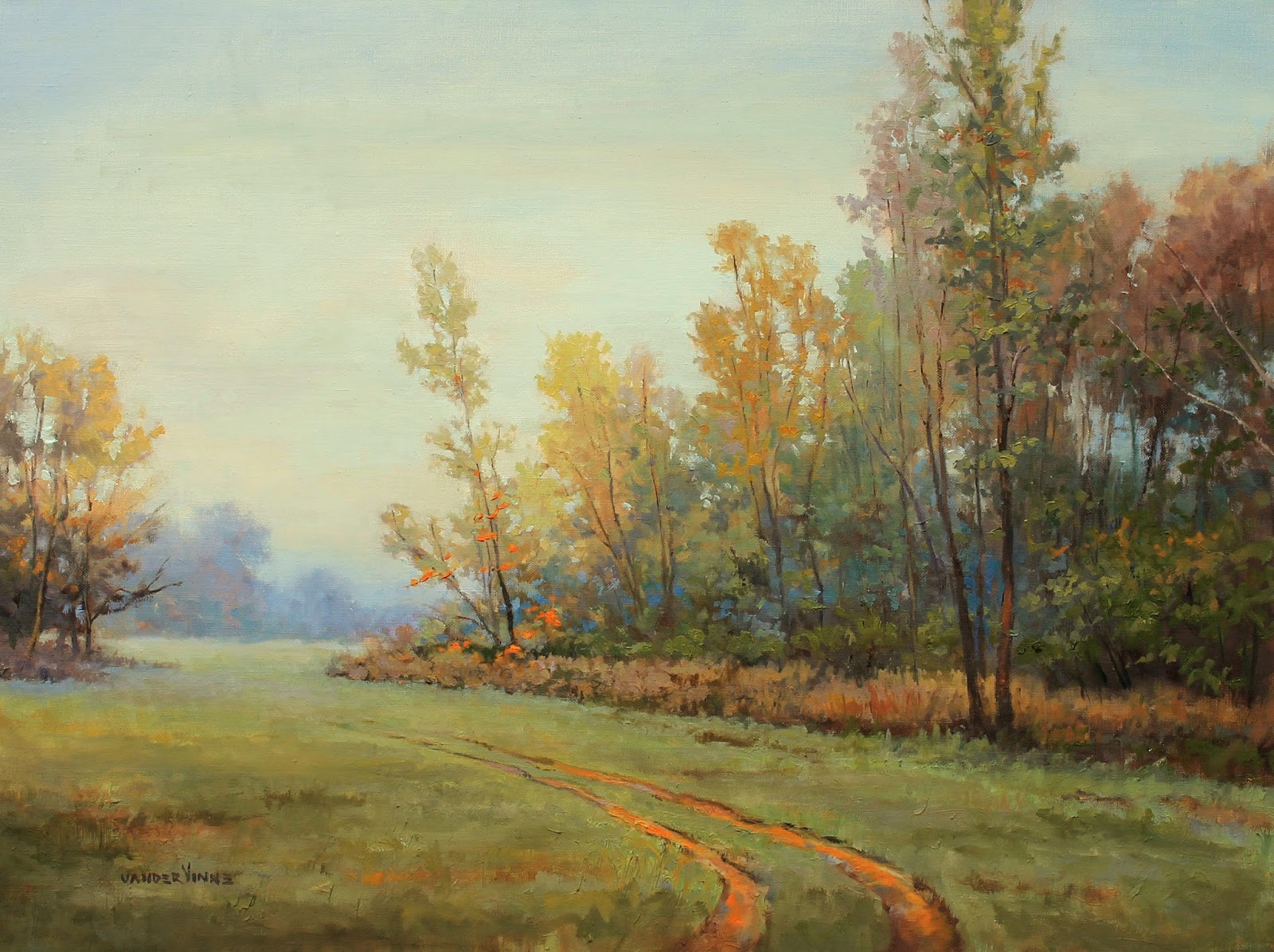 As this winter seems to continue to get longer and longer, I continue to try to think of the joy of Spring that is allegedly just around the corner. Here's a studio painting I did last year where I was trying to capture the incredibly thick air that is damp and cool, yet somehow comfortable. It creates an unrivaled atmospheric quality and one I am sure I'll attempt to capture again.

This painting is available. For information on the piece, contact me at 219-241-1392 or by email at studio@vandervinnestudio.com.
Posted by Mark Vander Vinne at 12:25 PM No comments: 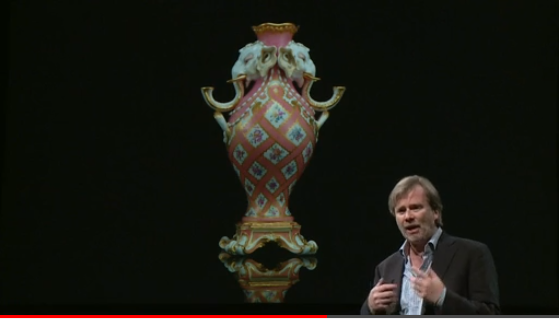 A decent video from TED, about how an art curator learned to love the simple and silly as much as the "serious" aspects of art. Worth the watch.
http://www.ted.com/talks/luke_syson_how_i_learned_to_stop_worrying_and_love_useless_art.html
Posted by Mark Vander Vinne at 6:19 PM No comments: 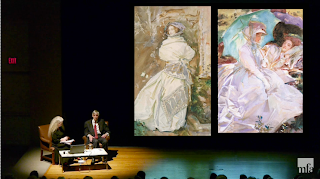 The Museum of Fine Arts in Boston has uploaded a conversation with Richard Ormond, grandnephew of John Singer Sargent and one of the foremost authorities on the painter and the man. This man knows probably more about Sargent than anyone else and is a very informative discussion of the man and his work.  The video is an hour long. and also gives some insights into Sargent's models and studio. http://www.mfa.org/sargent-lecture
The exhibition will continue through January 20, and there's an excellent catalog of the show.

Posted by Mark Vander Vinne at 1:40 PM No comments: 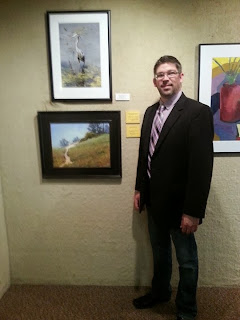 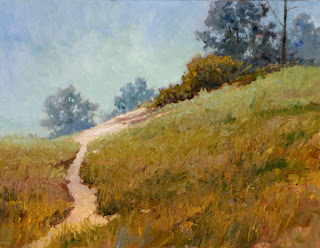 I am honored to have won the Best Painting Award at the 35th Regional Exhibit at the Midwest Museum of Art for my oil painting "Finding the Path". The night was a truly spectacular night as I was greatly surprised to not only have both of my pieces get into the show, but also both receive a purchase award. And then to find out I received the Best Painting Award...well, I was simply floored by it all.

Along with this honor, I will be giving a noontime talk on Thursday, October 24th at the museum.
Posted by Mark Vander Vinne at 12:44 PM No comments:

My palette is made of glass and sits on a taboret. Sure, it's not the epitome of a set-up, but neither is my studio. But we do what we need to do to make things work. I love the glass palette, because it is easier to scrape off the paint when it dries. Which it sometimes does. Also, with a wood palette you must repeatedly put linseed oil on (and the oil from the paint soaks into the wood) to create a glass-like surface. Well, then why not just go with glass?

Anyway, if you notice on the palette I set up my paints the same way every time, from lightest color to darkest color, going from left to right. The set-up is the exact same on my field easel. I do this so I can instinctively reach for the color without having to look for it each time I want it. Painting is hard enough, so I try to set things up to make the little things easier and simpler.

Underneath the palette are white gripper sheets used for protecting the inside of your cabinet, found at the local superstore. Because I usually don't tone my canvases, I want to be able to see the color as pure as possible against white. I have thought about putting down a middle gray underneath, too. But right now it's still white. 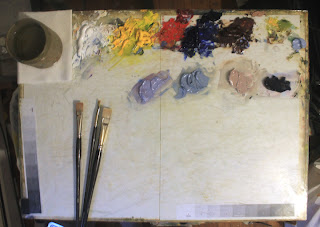 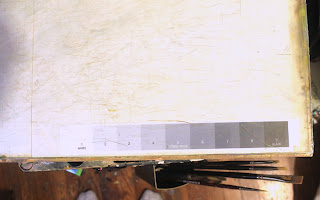 Because I have been wanting to understand and work with values better, I have printed out two 9-step value strips and placed them underneath the glass. So when I mix a value, I can compare it to the strip to see approximately what value I have mixed. It's interesting how sometimes I'll mix a 6 or 7 and believe it's a 4 or 5. This also helps to keep the overall value relationship of the painting. I don't really use it once I have a set value for the painting, as all subsequent values will be compared to the first one I mixed. As an example, in the first photo I have begun to mix color piles for the painting that is now on my easel. Because these are for the sky of the painting, I want to make sure I keep the values the same, but have different hues to mix in the sky (see my post on Color Variation.) The color to the far right is a near black and not intended for the sky. I usually mix it early so I have a comparison of the full spectrum of value.
Posted by Mark Vander Vinne at 4:35 PM No comments:


All composition is based around placement and delineation of the center of focus, or focal area. The decision of what you want to be your focal area is as personal as the subject matter. Whatever you decide, there are several ways to make sure it remains the focal area.

Here are 9 ways to create a focal area. It is probably best to use more than one of these. Too many though and you may create a bullseye effect, where the eye doesn’t leave the focal area and wander around the rest of the painting.
While some of these have a stronger visual pull than others, the key to making all of these work is making sure that areas of interest in other parts of the painting are subordinate to the center of focus. When looking at paintings, try to figure out which elements the artist has used to create a center of focus.

Below are some paintings by past and present masters. Also, the last few are mine, and I'll let you judge whether or not I'm succeeding in creating a gquality focal area. See if you can find out which of the 9 ways are being utilized (texture will be more difficult because you can't really see it in a photo of the work).